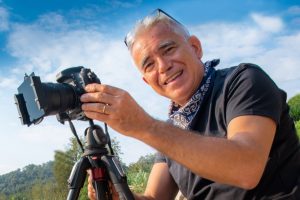 The week of the Recanati Art Festival 2021 begins in the name of strong emotions with the inauguration of the exhibition in memory of Fabio Mariani scheduled for Tuesday 6 July at 18.30 at the Civic Tower of Recanati, in the presence of the mayor Antonio Bravi and the Councilor to the Rita Soccio Cultures. Fabio Mariani was not only a point of reference for the Art Festival, but he was also at the forefront of many other cultural initiatives in the city, especially those concerning photography, his passion, and many remember him with esteem and affection . The association promoting Whats Art was very close to Fabio, not only professionally but also personally and, after the shock suffered by his sudden death, he strongly wanted to give him a “photographic memory”, which would open the 5th edition of the Festival, the first without him. The set-up was entirely curated, courtesy of his wife Lucia, by his friends and colleagues from the photographic club “Objective for all. C.C.S.R Le Grazie ”, who will remain the official photographers of the Recanati Art Festival. The exhibition collects the best shots that Fabio took precisely in the years of the Recanatese Performing Arts Review, a project that he has strongly supported since the first edition. Thanks to the municipal administration and the technical office, the exhibition will be visible to the public on the external wall of the Civic Tower until 11 July.