The emotions of Art Festival start from Numana 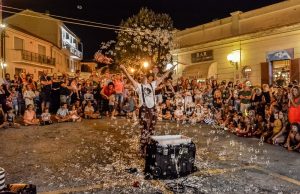 Once again, Art “on the street”, the one accessible to all, did not fail to give emotions in the first stage of the Art Festival 2022, offering the public of the historic center of Numana traveling shows from 6.00 pm to midnight. An evening worthy of the opening of the Numanese summer, which officially inaugurated the summer program with more than one hundred and fifty events. And so the tourists, who have already sold out, the residents and the public of the neighboring cities, were able to enjoy the benefits of the performing arts in a rediscovered “being together” long desired. In the focal points of the center, the artists did not fail to amuse and amaze the audience, involving them as an integral part of the show.

Great satisfaction from the Whats Art Association, which was entrusted with the artistic direction, which with this first stage was able to realize the desire to export the format of the Festival, born in Recanati, beyond the province. Also great was the satisfaction of the mayor, Gianluigi Tombolini, who spoke during the evening, who strongly believed in the Festival and who contributed to spreading the culture of “free shows” for everyone. And after the whirlwind of strong sensations for the debut stage, Art Festival continues its artistic marathon.

The next three-day appointment in Recanati, in the Leopardi’s historic center, on 8, 9, 10 July.