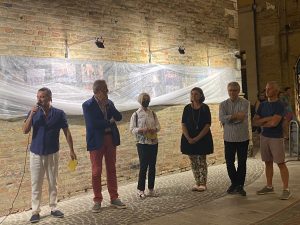 The photographic exhibition with the most beautiful shots by the CCSR Le Grazie Club “Obiettivo per tutti” opened the 6th edition of Art Festival Recanati on Tuesday 5 July, whose final evenings are scheduled for 8, 9, 10 July in the historic center.

To inaugurate it, in addition to the artistic director Gian Luigi Mandolini and Roberto Bartomeoli of the photographic club, also the mayor Antonio Bravi and the councilor for culture Rita Soccio of the Municipality of Recanati, who together with the Marche Region granted patronage for the event. «A Festival that has the merit» said the mayor Bravi, «not only to animate the historic center but to create synergies between the different cultural realities through good communication. Congratulations also to those who set up the exhibition, inaugurating a truly strategic exhibition space, which embellishes the Tower and attracts many visitors ».

An exhibition, set up at the Civic Tower in Piazza Leopardi, to which the promoting association Whats Art is very keen and to which it owes a lot. The exhibition not only allows the Festival every year to create a space of historical memory of everything that happened the previous year, but also allows to keep alive the memory of Fabio Mariani, who was the creator of it and who, thanks to the synergy it has been able to create with the whole club, it has allowed Art Festival to have artistic photos every year that increase its prestige. Roberto Bartomeoli explained a bit how the Photographic Circle has changed after the loss of Fabio, and the willingness of all photographers to continue their commitment to the Festival in his name. Also present at the inauguration was Lucia, Fabio’s wife, visibly happy and excited about the tribute.

“We open the Art Festival with the by now customary photographic exhibition of the CCSR Le Grazie club which, through beautiful and meaningful images, testifies to us and makes us retrace previous editions” – said the councilor Soccio – “Networking between cultural associations citizens for the success of events is the right path that we are all following and supporting together for the common good of our community. On this occasion, our thoughts go to Fabio Mariani, the true driving force and cornerstone of the Club and of this special collaboration with Art Festival ».

The exhibition will be open 24 hours a day during the Festival and will remain set up for a fortnight, available to the many tourists who circulate in the historic center. The street shows will then begin on Friday 8 July starting at 6.00 pm, a long journey through exhibitions, performances, street food and the artistic handicraft market in Corso Persiani.

For music there are many proposals, from the blues of Elli de Mon, to the rock garage of the Ancona group Heat Fandango, to the Paul Giorgi live, to the Roman rocker Johnny da Basso. For the theater, the twenty-year experience of the Rebis Theater will stage a dialogue between Nature and a curious actress, by and with Meri Bracalente. Also for the theater, the Compagnia MitiMuti will propose a reinterpretation of Ovid’s Metamorphoses. With a special dedication to all children, the Compagnia Pouët returns, by popular demand, with a brand new show of puppets and marionettes. Clowning and food for thought will be offered by Andrea Farnetani, Peppino Marabita and Damiano Massaccesi. For the “high voltage” section, the aerial dance by Silvia Valenti of the Compagnia Circostanze, the aerial acrobatics of the Revolé Company, evolutions on the German Wheel of Rhon and the Three-wheeled Giraffe Monicycle by Circo Puntino, area experiments with the rubber band of the Compagnia AL’ER and with the background of the Argentine atmospheres of the tango, the verticals and the circus theater of Gaby Corbo. There is also a dance show inspired by Rodin by the Fabula Saltica Company. In Piazza Leopardi the show of music, fire, theater and dance, inspired by Mexican Aztec culture, by the QUETZALCOATL ensemble.

For exhibitions, in addition to the photographic one, the one created in collaboration with the 4F students of the Podesti Institute in Ancona, at the Passepartout coffee shop.

The post-festival will be organized by the Circolo Arci La Serra.

Recanati is the second stage of the Art Festival, which for 2022 has tripled its appointments also involving Numana and Porto Recanati. After the success of the Numana date, June 25, and the three days in Recanati, the Art Festival will take place in Porto Recanati, July 23 and 24 at the Parco Europa. The whole program can be consulted and downloaded here.