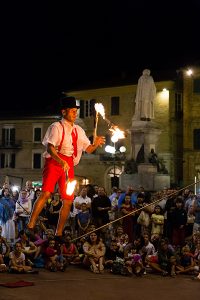 The third edition of the Recanati Art Festival will take place on July 13th and 14th, an art review of performances created by the Whats Art Association to enhance the cathartic power of Art and the beautiful architecture of the Historic Center of Recanati. Performances of theater, dance, music, circus, photographic and painting exhibitions, games and workshops for children, will take place over a two-day summer festival.  In just two years the festival has increased much more than the organizers could hope for, in terms of notoriety and public, thanks also to the growing support of the municipal administration. “It was a bet” – says Councilor for culture Rita Soccio – “which was won thanks to the great professionalism and quality of the artists involved who can integrate with the cultural context of our city”. Compared to the first year the selection of the artistic casting has been extended from regional to national scope, furthermore a market of artistic crafts has been added with exhibitors from all over Italy and it was made a work of fiber art, inspired by the painting of the Lotto ‘Annunciazione’. This year 2018, it is confirmed: more than 30 sites of shows spread out along the Center, an area entirely dedicated to children, which will be the one at the main street called Corso Persiani, the craft market, street food points, spectacular performances and lots of fun all accompanied by the talent of the artists. Among the innovations: the presence of some foreign artistic companies, a sound experimentation that will take place in the Civic Tower and a completely renewed graphic. The festival was created and continues to evolve in the hope of becoming more and more a source of aggregation for everyone and common good for citizenship.  We believe Art is therapy, it is a valid antidote to overcome everyday life and as such it should be made accessible by everyone, free of charge. This is the mission statement of the festival; this is the guiding principle of all the initiatives of the Whats Art Association. The timeline of the dates will follow: within the month of February the registration for artists, by March / April the registration for the exhibitors of the craft market and that for street food operators.

Soon the other initiatives that Whats Art has planned will also be announced.